“The ultimate goal is to keep all our children safe,” said the Honorable Minister V. Arden Mclean, who said that he would be continuing to advise the driving public as new initiatives are brought on stream.

Fifteen mph school speed zones were introduced on 14 February at the Red Bay and Savannah primary schools.  The new zones will operate from 7:30am to 8:45am in the morning and from 2:30pm to 3:30pm in the afternoon, periods during which special amber flashing lights will also warn all road users of the new driving speed. Police officers will be showing their presence at both zones.

This has been announced by the National Roads Authority (NRA), in coordination with the Ministry of Communications, Work & Infrastructure, the Ministry of Education, Training, Employment, Youth, Sports & Culture, the Royal Cayman Islands Police and the schools.

These zones are designed to reduce the speed of vehicular traffic.  This will enable shorter vehicle travel distances in which drivers must recognize and react to situations requiring slowing, stopping or evasive action, said NRA officials. “School zones” begin at approach to the 15-mph zone signal and end once drivers have passed the “End School Zone” sign.

This latest addition to road signage is part of the NRA’s school zone safety campaign.  This began with the introduction of school zone signage that can be seen at various schools across Grand Cayman, as shown in accompanying photos.

The introduction of all these signage will enhance the effort towards raising awareness of drivers of the need to reduce speed and exercise additional caution when driving through these zones.  Flashing lights, for example, have been shown to raise driver awareness and help to enforce   reduced speed limits.  Below is a photo of the configuration to be used on Shamrock Road at the Red Bay and Savannah primary school locations. 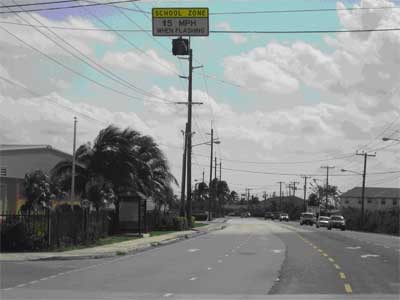 The next step in the NRA’s school safety campaign will involve establishing a set of uniform guidelines for all of Grand Cayman’s school zones.  This will delineate the type of signage and road markings that need to be used to notify vehicular traffic of what is required to enable them to manoeuvre through the new school zones.

“The ultimate goal is to keep all our children safe,” said NRA Director Colford Scott, who said that he would be continuing to advise the driving public as new initiatives are brought on stream.