In response to concerns stemming from the Esterley Tibbetts Highway expansion, Minister of Works the Hon. Arden McLean arranged a community meeting with residents of Governors Harbour on Monday January 9, 2006.

In response to concerns stemming from the Esterley Tibbetts Highway expansion, Minister of Works the Hon. Arden McLean arranged a community meeting with residents of Governors Harbour on Monday January 9.
Accompanying the Minister was National Roads Authority (NRA) Director Colford Scott, NRA Planning Director Denis Thibeault and NRA Engineers, Paul Parchment, Peter Ogden and Nicholas Johnson.
Area residents were wary of the construction because they believed that the highway would run directly in front of their homes. The officials dispelled this rumour by showing them the road plans and explaining in detail how the extension would be constructed.
The area of greatest concern was Peninsula Avenue, the main road that residents use to access streets leading to their homes. The Minister assured the crowd that the avenue would not be absorbed into the highway which will instead run parallel to the avenue. An exit point would be provided at the end of Peninsula Avenue for residents to gain access to the highway.
“Contrary to popular belief this road is public property” explained Mr. McLean, “but we, the government and the residents of this country, need to be receptive to each other’s concerns and plights.”
Mr. Scott later elaborated that using Peninsula Avenue as the highway would not be practical due to the number of entrance points running off it. He said that if the avenue were to be used, it would actually reduce the highway to the category of “just another road.”
While residents were still concerned about the highway running parallel to Governors Harbour, the Minister explained that by being parallel, the financial costs will be much less to them, their children and the country. “I believe that consultation is better than confrontation,
so your concerns are being considered, but I know and you know that we have to get this road through,” the Minister said.
The original deadline for completion of the highway extension was set for December 2006, but due to traffic congestion, the plan was accelerated and the new deadline is this June. The Minister concluded that for this road work to happen in six months, people will be inconvenienced a little, but with the end justifying the cause, he urged the public’s continued patience on West Bay Road.
(GIS) 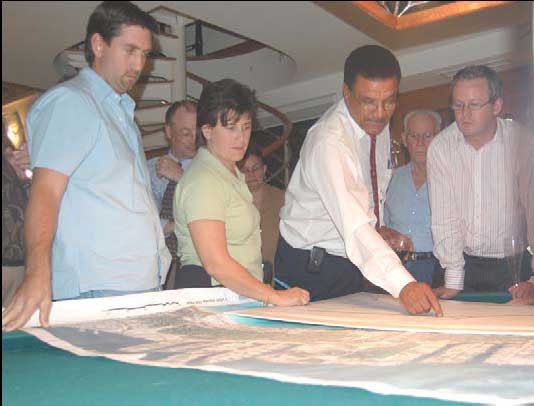